From the magazine: Going Underground with Aircraft Towing Systems 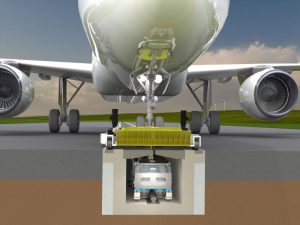 Making aircraft more efficient is very important for improving sustainability but what can be done when they are on the ground? Deputy Editor James Muir spoke to Aircraft Towing Systems (ATS) World Wide about its game-changing proposal.

As aviation grows, so will its contribution to global carbon dioxide emissions. Aircraft are considerably more efficient than they used to be but they still use significant amounts of fuel and emit harmful gases. According to the report Decarbonizing Aviation: Cleared for Take Off, almost 10% of emission reductions can be achieved by fixing inefficiencies when aircraft are taxiing and waiting to take off.

Aircraft Towing Systems (ATS) World Wide has developed a towing system that could not only save the airlines considerable amounts of money through reducing fuel use, but also make operations safer. Its system works on a rail, with the pilot taxiing onto the towing system and once the nose landing gear is secure, they can turn the main jet engines off and relax. In a pre-engineered pattern, the towing system, which runs along a rail embedded in an underground channel, then tows the aircraft to the gate and back to the runway.

It has three primary components, a channel in the ground covered in steel plates, a pullcar in the ground powered by an electric car motor that drives hydraulic pumps driving hydraulic motors that clamp on a monorail in the bottom of the channel and software. The pullcar is connected through the cover plates to the tow dolly. The tow dolly looks like a round disc with ramps on each end for the aircraft’s nose landing gear to drive upon. Then the pilot shuts off the engines, which is “when all the good stuff starts happening”, in the words of Vince Howie, CEO of ATS World Wide. Fuel is saved, emissions are not emitted, noise is reduced and the aircraft is being guided significantly reducing the chance of collisions.

He adds: “The system is fully automated, so it knows what type of aircraft is loaded into the tow dolly, then takes the aircraft to the correct gate and knows where to stop so you don’t overshoot the jet bridge.”

Howie has experience of overshooting, taking a flight recently that overshot the jet bridge slightly. It took 27 minutes before they were pushed back about a metre so the jet bridge would line up.
The system automates several manual processes and optimises taxiway and gate selection. Howie has been working with Oklahoma State University for six years doing development work. They calculated throughput at airports could increase by up to 30% using the ATS system. Several airports are interested for this reason alone.

Howie spent 29 years in the US Air Force then served as the Aerospace and Defense Director for the state of Oklahoma working directly for the Governor. The idea came about at the 2015 Paris Air Show where he met Stan Malicki who had an innovative proposal to move aircraft around airports. Aircraft Towing Systems World Wide LLC was formed in 2016 and Oklahoma State University was put on contract to develop the idea that same year. Two years ago, the project needed working full-time so Howie left his job at the state and filled that role.

Malicki had been working on the idea since the early 2000s after he returned to his native Poland having lived for a long time in West Germany, where he became a successful businessman. A friend of his, a 747 pilot, was complaining about the amount of fuel being burnt on the ground. So Malicki gave the problem to some Sukhov helicopter engineers now working for him in Warsaw, they developed a similar concept using motors above ground and run by belts.

To put the system in place, ATS would run simulation models looking at aircraft traffic flows at the airport and how to optimise everything. Howie says: “If airports have the complete system, it would have tracks running from every gate to taxiways and ramp areas with return loops. They would have a pullcar and tow dolly for every gate plus about 10% extra pullcars. We would calculate the maximum number of aircraft on the ground at any one time and that’s the number of pullcars an airport would need.”

The fuel savings would be considerable. Howie says that around 80% of airline fleets are composed of Airbus A320s and Boeing 737s type aircraft, which burn around nine gallons of fuel per minute during taxi. Average taxi times at US airports are between 16 and 27 minutes, and with up to 900,000 movements at large airports, ATS predicts fuel savings could be almost $500m. Also, towing aircraft places less stress on the airframe than using the throttles to move aircraft.

Howie says: “The enticement for airports comes from saving the airlines fuel, the airport becomes a good partner in the community because they are reducing emissions and noise, also increasing efficiency by improving throughput. The airport would recoup the cost by charging a 50% landing fee based on fuel savings of that particular aircraft during taxiing. It would be a 50/50 cost share and savings between the airline saving 50% on fuel during taxi and the airport charging 50% landing fee.”

Interested in reading more? The full article was published in the November/December issue of Ramp Equipment News, click here to read the digital edition.

ATS has released a video showing how the system works, which can be viewed here.