It is understood that Spirit Airlines and its ramp service team members (located at Fort Lauderdale-Hollywood International airport) have ratified a tentative agreement, completing the negotiation of their first collective bargaining agreement.

According to a Spirit spokesperson, the team members ratified an interim agreement in June that covers wages, job security, union security and benefits.

This agreement also addresses job scope, workers’ hours of service and overtime, seniority and uniform as well as health and safety issues.

The new route will connect traffic through Los Angeles to over 200 destinations in North and Latin America. Thanks to the fuel-efficiency of the Boeing 787 aircraft, AA Cargo will be able to reach this new international location directly. The Auckland route is part of the company’s efforts to expand operations in the Pacific, including other new routes to Haneda and Sydney.

Managing Director, Cargo Sales – West, Joe Goode, commented positively on the development, saying: “Our teams at LAX and in the Pacific have been especially excited for the launch of the new 787 service to New Zealand. We look forward to a strong demand on the cargo front between AKL and LAX, and anticipate additional demand beyond New Zealand into Australia using our interline partners.”

On its debut journey out of Los Angeles, America’s freighter aircraft is carrying a variety of perishables and other consolidated freight, and will return from Auckland carrying medical supplies and mining machinery. Reportedly, some of the most common commodities shipped into and out of the region include e-commerce goods, perishables, horticulture products and chilled fish and meats.

Complementing the company’s existing role for the carrier, American Airlines has appointed GSA Cargo Service as its sales agent in Auckland. Menzies Aviation will provide ground handling services for the carrier, with freight reception through its cargo central facility. 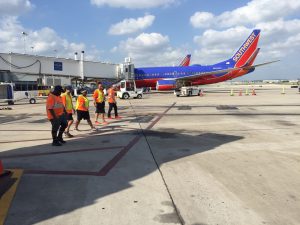 Flight Services and Systems hosted its First Annual FOD Awareness Day on June 14 in an effort to increase awareness over the subject and to discuss and promote the safety topic of FOD.  Each of its stations that has a ramp operation participated in the FOD Awareness Day.

In the event, all of the stations discussed FOD with their teams throughout the day; in fact, FOD was the safety topic for the pre-flight safety huddles and for each safety briefing. Every FSS Station Leader also hosted an open discussion on the topic of FOD to ensure that each of the company’s employees fully understood a number of points, including what to do in the event of locating FOD and whether a report needs to be filed.

Delta Air Lines and Virgin Atlantic yesterday announced changes to summer 2017 schedules, in a drive to improve their joint network between the US and the UK.

For Delta Air Lines, the move sees the addition of three new services, launching next year.

For Virgin Atlantic changes will also be taking place next year. Beginning March 26, 2017, the airline will start flying daily service between London Heathrow and Seattle, replacing the one currently operated by Delta. Additionally, a daily nonstop service between Manchester and New York JFK will commence May 25 next year, replacing the one currently operated by Delta. Delta will then resume this service for the winter 2017.