Los Angeles International has become the twentieth US airport in dnata’s network of ground handling operations. 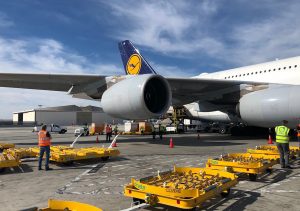 David Barker, Chief Executive Officer of dnata USA, said: “We are thrilled to be launching operations at one of the world’s leading international airports. Adding Los Angeles International airport to our growing network underlines our strong commitment to the US market, where we have significantly expanded our operations through massive investments in our facilities and resources in the past two years. We see an opportunity to create a step change in service excellence for our customer airlines at this important gateway.”

Joerg Mnich, Vice President Commercial Airport Infrastructure, Lufthansa Group, said: “As a premium airline the Lufthansa Group Airline is excited to grow the North American relationship with dnata into another major hub like Los Angeles.With our very positive service experience from destinations like Boston, New York-JFK, San Diego and Tampa we are looking forward to providing first class service to our customers with our handling partner at Los Angeles International airport.”

Since its entry into the US market in 2016, dnata has invested a total of US$35m in its US operations and hired 1,000 additional employees to its regional team. Having won over 45 new contracts in the past 12 months, dnata now serves over 60 airlines in the US.