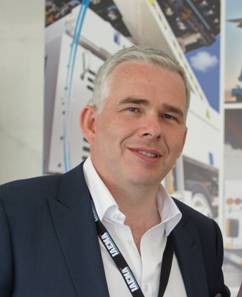 He may not have been the first person in history to have a sudden flash of inspiration, but Archimedes is the man who made the word Eureka famous. It all started when King Hiero II grew skeptical about his new laurel leaf-shaped crown. The king wanted to know whether the crown was solid gold, or if some other metal had been added. It was up to Archimedes to figure this out, only there was one catch: he couldn’t destroy the crown.

It seems to me that the same conundrum exists in preventing aircraft damage. Most probably, no operator wakes up in the morning with a plan to hit an aircraft with their GSE; and most certainly, no GSE manufacturer plans to design their product with the intent of hitting an aircraft; and of course no airline buys its aircraft with “Kiss me quick, I’m looking for ramp rash” stickers emblazoned all over its livery.

Early last year I was called by David Roberts, Corporate Safety Manager, Aircraft Ground Damage, at British Airways. He asked us to participate, along with other GSE manufacturers and stakeholders, in a five-day working group which had one aim: to stop 3.5 tonne container loaders from hitting its A319-320 fleet at all BA’s stations. The team was assembled at 7am every morning for a full week airside, along with BA operators, maintenance providers, trainers, aircraft damage repairers and GSE manufacturers. We set to work to establish the root cause of failure. We looked at the GSE, its operating procedures, the units in operation, the new technology presently available for aircraft collision avoidance, the interface with the aircraft, the containers, the dollies and the way they repaired the aircraft damage. No stone was left unturned. But still we couldn’t replicate why operators hit the aircraft consistently in the same zone. But then, out of nowhere on day three, we observed an accident about to happen: it was our Eureka moment!

An AKH container was stuck, half in, half out of the rear hold of an A319. It was full of suitcases, and therefore too heavy to manhandle. The way the operator was trying to un-stick it was platform up and down, loader wheels turning left and right, and driving forwards and backwards. He was under time pressure so he was trying to do this simultaneously. The loader lurched forwards, almost putting the bed inside the hold.

Root cause of failure? It was clear that the interface alignment is critical for loading containers without them sticking on the A319, but nobody released how critical. We all profess to be excellent drivers, but if you were asked to park your car 40 times per day, five days per week in the same spot with a parallel positioning accuracy of plus or minus one inch, could you do it? I guess not. So why should we expect GSE operators to do so? Also, on inspection of every A319, the in-hold entry pallet drive motor was completely worn down to the bare metal. No wonder containers were getting locked between the load guides: they were unable to pull containers in, relying only on the loader pushing them in.

Short term quick fix: Focused driver training on the importance of perfect alignment and paint a red stripe on the loader to help line up accurately with a red mark on their aircraft.

Medium term fix: Fit a load bed extension to the loader with a powered roller to move the loader drive station further away from the aircraft body and fit soft rubber buffers to the cab. Also, get aircraft maintenance to replace the in-hold pallet drive rubber wheel more regularly, before it gets worn down to bare metal.

Long term fix: Get Airbus to consider changing its in-plane container guide design on all new aircraft to a better container lead-in design, preventing container lock up and allowing less accuracy of the loader operator.

In summary, that Eureka moment has allowed BA to engineer out the chances of repeating this particular incident, but only by working together with Airbus, with their operators and with the GSE manufacturers to solve seemingly impossible problems. If this partnership is well managed by the airline, as it was by British Airways, we can start to make a (metaphorical) dent in reducing the aircraft damage bills.