The news that the Port Authority of New York and New Jersey is to raise the wages of its handlers, security staff, PRM agents, cleaners and other workers has been met with enthusiasm. This award is the result of a long battle that actually began in 2012, with a campaign that was waged under the banner of Fight for US$15. That fight has taken almost six years to bear fruit but finally, the New Jersey airport staff will gain wage parity with their colleagues in New York. The first increment is due this September and this will see Newark Liberty’s workers being paid US$12.45 per hour, a US$2 gain. Further salary increments will follow in due course.

The downside to the salary breakthrough, though, is the fact that the full hourly benefit, that of US$19, won’t be achieved until 2023 – that’s another five years away.

Taking into account inflation and the continual rising cost of living, one is left wondering about the monetary value of this increase. Airport staff are notoriously poorly paid – so will this financial incentive make a real difference to their lives? 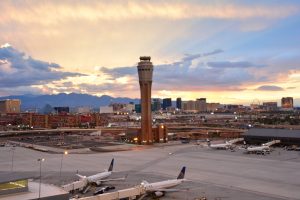 Building on a 20 year relationship, Las Vegas McCarran International has renewed its passenger processing solutions with Rockwell Collins, adopting new passenger technologies that should advance its technological position well into the future.

“Our team is constantly evaluating the airport’s infrastructure and operations seeking ways to enhance customer service, maximise efficiencies and increase flexibility,” affirmed Samuel Ingalls, assistant Director of Aviation over Information Systems for McCarran. “Over the past two decades we have had great success in managing our soaring passenger volume through the implementation of common use processes and other cutting-edge technologies such as those provided by Rockwell Collins.”

With this contract renewal, Rockwell Collins will refresh 176 common-use self-service kiosks with new units to support the upgrade of Terminal 1, helping McCarran to maintain its position as one of the leading airports in North America.

Also included in the renewal is continued support for additional Rockwell supplied airport systems. These include ARINC’s MUSE; a local, standalone departure control system; ARINC’s BagLink and radio frequency identification bag tag support. Also in the package will be the specialist’s self-boarding gate solution that allows passengers to scan a boarding pass and board the aircraft through an automated gate.

Catering to a growing market 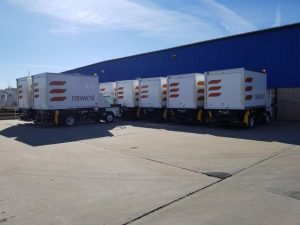 In a recent initiative, Global Ground Support partnered with Newrest Catering North America to supply catering trucks to two new kitchen locations that Newrest is opening. The new sites are in Salt Lake City, Utah and Raleigh Durham, North Carolina.
Global has been awarded an order for 43 catering trucks to supply these two locations. The first trucks began arriving at the locations in February this year and the remainder of the units should be delivered by April 2.

American Airlines Cargo has been named the International Carrier of the Year by the Airforwarders Association (AfA), a trade group that represents the interests of US-based air freight providers.

The award recognises American’s achievement in customer service, on time performance, and reliability and security, alongside other disciplines, and was announced on February 19 during the Air Cargo Conference in Austin, Texas.

“This award is a testament to the hard work and commitment of our team members around the world,” said Rick Elieson, American Airlines Cargo President. “It also shows that our dedication to continual improvement – in our technology, our systems and our processes – is keeping us at the forefront of the industry. Thank you to the AfA for recognizing our efforts, which will only continue this year and beyond.”

This is the first time American has won the AfA International Carrier of the Year award. In 2016, the company was awarded the AfA James Foster Memorial Award, which recognises carriers that exhibit a high level of professionalism and dedication to advancing the airfreight industry.

Gold accolade for Menzies in Mexico

Gold Status is awarded when a station achieves two consecutive years of 10% improvement in the areas of injury, illness and ground damage. 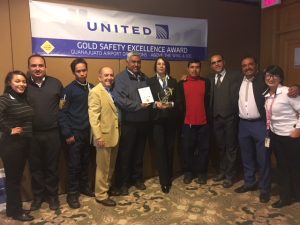 Sylvia Trost, VP Central and South America, commented: “This important goal could only be achieved due to the excellent teamwork under the leadership of Francisco Melgoza, United Airlines’ Airport Manager, and our Station Manager, Juan Carlos Mondragon. We’re also grateful for the support of Juan’s whole team, our Regional Manager Gildardo Fernandez and Angel Jhaya, our Operations Director for Mexico.” 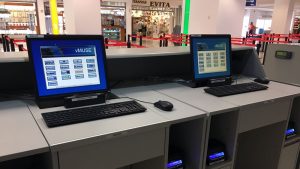 The vMUSE application is currently operational at Mazatlan and Zihuatanejo airports. By 2019, vMUSE will be installed and operational at Acapulco, Culiacan, Chihuahua, Monterrey, Reynosa and San Luis Potosi.

CUPPS will give the airports more flexibility and allow them to make better use of their facilities; the installation of the systems takes from three to five months.

Logan staff go back to work

The mooted strike action at Logan International did actually go ahead but lasted only two days, with industrial action ending on February 8.

The workers involved, who handle JetBlue Airways as well as other carriers, convened with state legislators, councillors and the city Governor last week to discuss their grievances. One upshot of the meeting was that officials have now pledged to put pressure on the two employer companies (namely ReadyJet and Flight Services & Systems), as well as JetBlue and the Massachusetts Port Authority, in order to permit workers the chance of organising a union.

At Richmond International airport, GAT Airline Ground Support has announced a partnership with Spirit Airlines. Beginning March 15, GAT will be offering ramp services, along with customer services and passenger assistance, thereby enhancing the travel experience for the carrier’s passengers.

The contract underlines the ongoing interest in outsourced handling provision within the US.

JetBlue Airways is gearing up for a rough ride over the next few days at Logan International. The bulk of the airline’s contractors, who are employed by ReadyJet and Flight Services and Systems, have been trying for over six years to become members of the 32BJ Service Employees International Union. Their attempts have drawn disapprobation from ReadyJet and Flight Services and Systems; indeed, both these companies have a history of fines for cases of theft and safety violations at the station, and allegedly have used threatening behaviour towards employees looking to unionise. Because of this, upwards of 500 baggage handlers, PRM assistants, skycaps and cabin cleaners are now considering strike action.

According to JetBlue (which supports the concept of a decent living wage), the intended strike will not adversely affect its operations at the airport, since it has subcontracted labour on standby.

Anchoring down in Anchorage 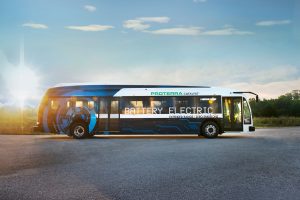 The Municipality of Anchorage’s Public Transportation Department recently hosted a press and Anchorage Assembly tour of the new 40 foot Proterra Catalyst E2 battery-powered bus, before it officially started up operations on Anchorage streets.

The bus has begun serving routes for the general public and will run for a four month trial period.

The trial period is designed to test how the bus performs in winter weather, to what extent cold temperatures will affect the battery life and whether it’s feasible to pursue an electric bus fleet in the future.  Performance will be monitored with a view to ascertaining how this technology might be adopted by refuse trucks within the city.

A 100% electric solution to urban (as well as airport) transport, the Proterra Catalyst model emits zero tailpipe pollution and will be able to reduce the CO2 footprint of a diesel bus by an impressive 244,000 pounds annually. The absence of a combustion engine means that the vehicle is also much quieter in operation.